My name is Magdalena Herreshoff and I live high up in the Andes in Ecuador, more than 7,000 feet above sea level, in a little village called Uzhupud, about 45 minutes driving from Cuenca. Every early evening I look out over the valley towards Cuenca to admire the changes of color of the sky and the movements of the clouds over the Andes, inspiration for my writings. I have been a writer all my life and have produced various Limited Edition Art Books, a combination of poetry, prose and original art,  some of which have been collected by various University Libraries in the state of Washington (see Books).

I am 78 years old (born in 1942 in the Netherlands) and 10 years ago, my husband and I decided it was time to have one more big adventure in our life.  We sold most of what we had and put our treasures in a storage in the Northwest, where we had lived for over a decade.  We each took one suitcase and headed off for the very first time to Cuenca, Ecuador. Other than visits to the States, we never turned back.  After a year we bought some property in Uzhupud and that is where I am now creating my limited edition handmade artbooks of poetry and short stories in my studio overlooking our lush garden with mandarins, fig trees, oranges, lemons, black walnut and banana trees.

My books “High in the Andes” and “Vodka Musings and Cloud Poems” were produced in 2017 and are limited art edition poetry hand-sewn books commonly called chapbooks. In 2018 I created a limited edition prose poetry book called “No such Stories”. In 2019 I completed an immigration project called Parables, Paraboles, Parabolae, No Mercy consisting of 5 Broadsides called Grace, Civility, I care, Are you alone now, and Compassion.

Presently I am working on a new book art project called Call and Response with poets Kabir and Rumi. This project consists of 6 small handmade books with lines from my poems and those of Kabir and Rumi. These books were originally designed on Adobe InDesign until one day my left eye blew out and was told to take 3 months off from the computer.  After many recovery months, I returned to the project on InDesign but was not enjoying the process. I decided to give up the Indesign format and to draw every image, all text, and make the book covers completely by hand.  Thus, no computer use and one of a kind.

4 thoughts on “About Me” 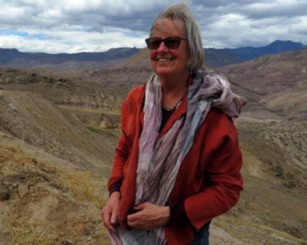